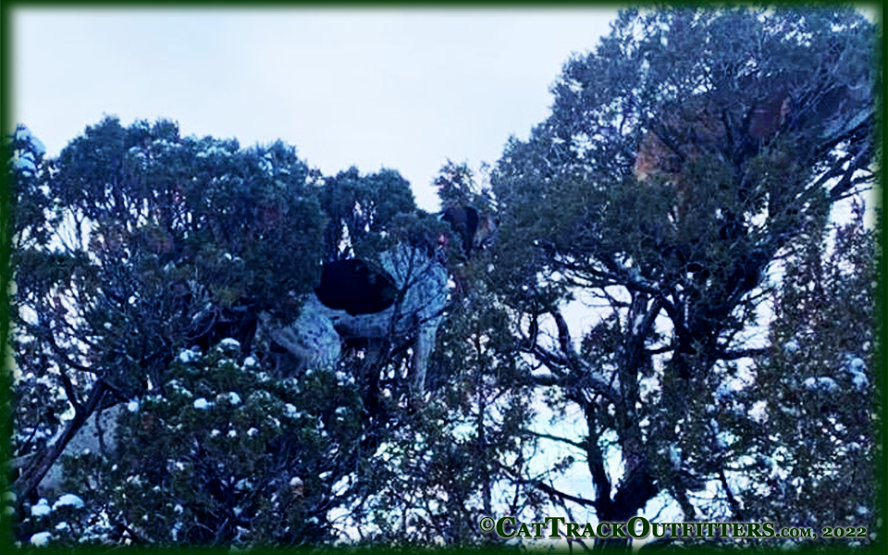 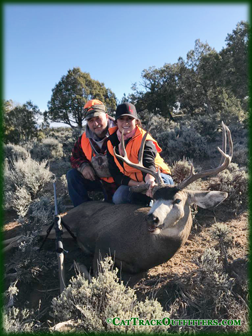 If you are looking for:

...then you've found the place to hunt! 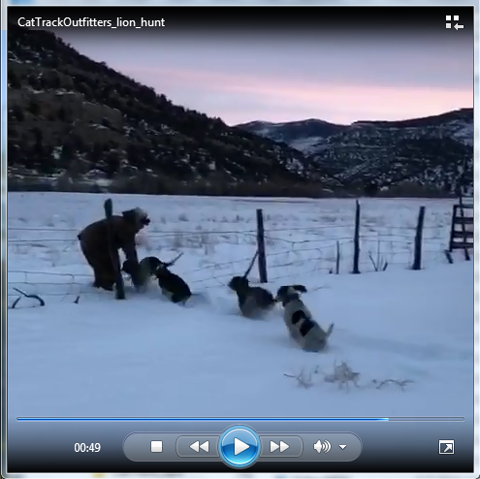 "I can’t accurately convey how hard these guys work for you; you just have to see it firsthand. You can tell early on that when you arrive, they don’t look at you as a dollar sign. They feel obligated to put you in front of a once in a lifetime experience. They absorb it, they stress about it, and they are dang good at it. They want your lion more than you do. "  more 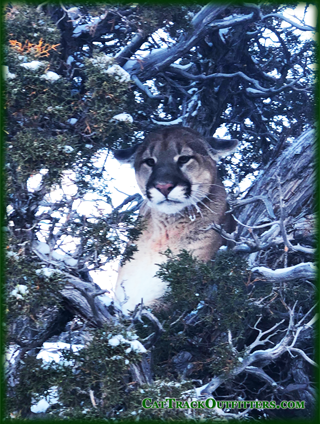 Cougars, mountain lions, pumas, and panthers are all the same species, which is known to scientists as Felis Concolor."...  "It is the second heaviest cat in the Western Hemisphere, after the jaguar." ...

"The cat has many names in English, of which cougar, puma and mountain lion are popular. "Mountain lion" was a term first used in writing in 1858 from the diary of George A. Jackson of Colorado." "Puma concolor holds the Guinness record for the animal with the highest number of names, presumably due to its wide distribution across North and South America.  It has over 40 names in English alone."

"This cat prefers habitats with dense underbrush and rocky areas for stalking, but can also live in open areas. The cougar is territorial and survives at low population densities. Individual territory sizes depend on terrain, vegetation, and abundance of prey." 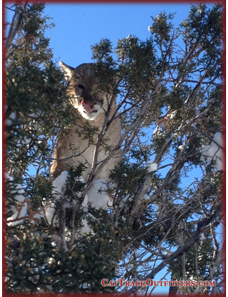 Cougars are slender and agile members of the cat family. They are the fourth-largest cat, and can be almost as large as jaguars. Besides the jaguar, the cougar is on average larger than all felids outside of the Old World lion and tigers. Adults stand about 24 to 35 in tall at the shoulders. Adult males are around 7.9 ft long, nose-to-tail and females average 6.7 ft, with overall ranges between 4.9 to 9.0 ft nose to tail; 25 to 37 in is comprised by the tail. Males typically weigh 115 to 220 lb, and females typically weigh between 64 and 141 lb.

"The coat is typically tawny, but ranges to silvery-grey or reddish, with lighter patches on the underbody, including the jaws, chin, and throat. Infants are spotted and born with blue eyes and rings on their tails; juveniles are pale, and dark spots remain on their flanks." ... "and by the age of 2 1/2 years, they will completely be gone." ...  "The head of the cat is round and the ears are erect. Its powerful forequarters, neck, and jaw serve to grasp and hold large prey. It has five retractable claws on its forepaws (one a dewclaw) and four on its hind paws." 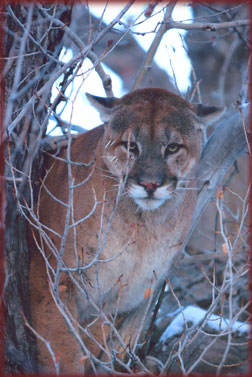 "Like almost all cats, the cougar is a solitary animal. Only mothers and kittens live in groups, with adults meeting only to mate." ... "Estimates of territory sizes vary greatly. ... from 10 sq mi - 500 sq mi. ... "Male ranges may include or overlap with those of females but, at least where studied, not with those of other males. ... Ranges of females may overlap slightly with each other."

A mountain lion's "life expectancy in the wild is reported at eight to 13 years, and probably averages eight to 10; ... Causes of death in the wild include disability and disease, competition with other cougars, starvation, accidents, and, where allowed, human hunting."

"Females reach sexual maturity between one-and-a-half to three years of age. They typically average one litter every two to three years throughout their reproductive lives; the gestation period is approximately 91 days. Females are sometimes reported as monogamous, but this is uncertain and polygyny may be more common. Copulation is brief but frequent." ... "Only females are involved in parenting. Female cougars are fiercely protective of their cubs, and have been seen to successfully fight off animals as large as American black bears in their defense. Litter size is between one and six cubs; typically two." ... "Young adults leave their mother to attempt to establish their own territory at around two years of age...; males tend to leave sooner. 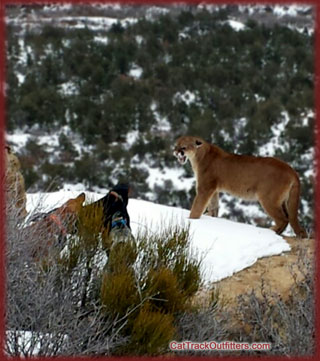 "An excellent stalk-and-ambush predator, the cougar pursues a wide variety of prey. Primary food sources include ... deer, elk, moose, and bighorn sheep, as well as domestic cattle, horses and sheep, ... It will also hunt species as small as insects and rodents."

"While large, it is not always the apex predator in its range, yielding to the jaguar, gray wolf, American black bear, and grizzly bear. It is reclusive and usually avoids people." ...

"Though capable of sprinting, the cougar is typically an ambush predator. It stalks through brush and trees, across ledges, or other covered spots, before delivering a powerful leap onto the back of its prey and a suffocating neck bite. The cougar is capable of breaking the neck of some of its smaller prey with a strong bite and momentum bearing the animal to the ground. Kills are generally estimated at around one large ungulate every two weeks. The period shrinks for females raising young, and may be as short as one kill every three days when cubs are nearly mature at around 15 months. The cat drags a kill to a preferred spot, covers it with brush, and returns to feed over a period of days."

Please tell us what you think!